You are here: home » history » birthplace of british motor racing

In the spring of 1994, Brian Hazell's hard work finally paid off. Following years of researching and compiling information and many trips to London to submit evidence, the RAC officially recognised Bexhill-on-Sea as the Birthplace of British Motor Racing.

Soon after the announcement, road signs on entry to Bexhill were updated to recognise this important milestone in Britain's history. In addition, obelisks were installed along East Parade to indicate the start and finish lines of the infamous races, which had taken place there in May 1902. Bexhill owes a great debt to Brian Hazell for his hard work. You can read the story of the Bexhill 100 Festival of Motoring - Bexhill's biggest event and one that celebrated Bexhill's motoring history. 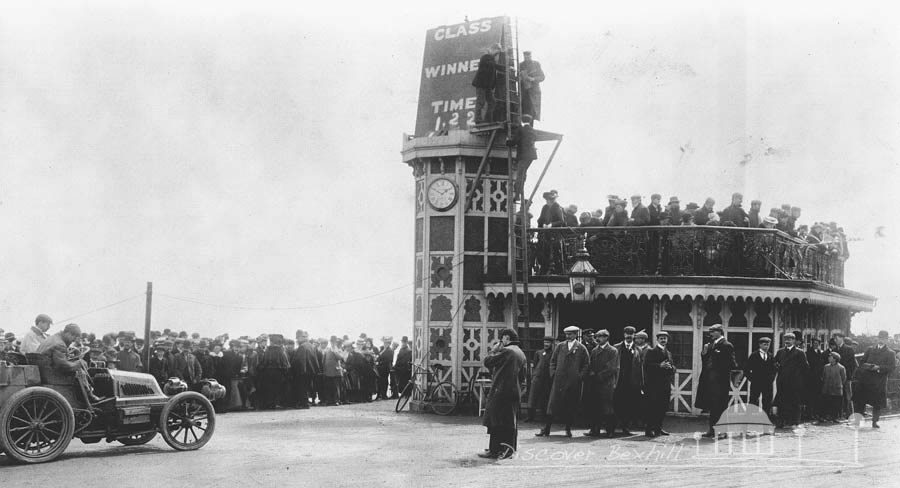 It was on Monday 19 May 1902 that British Motor Racing was born in Bexhill-on-Sea. The 8th Earl De La Warr had encouraged the Automobile Club of Great Britain and Ireland to organise the ‘Great Whitsuntide Motor Races’. With business interests in the tyre-making firm Dunlop, the Earl was led to create a Bicycle Boulevard on the seafront in 1896, which stretched from the Sackville Hotel in the west to Galley Hill in the east. He turned this bicycle track into a one-kilometre motor racing course in 1902 as, being his own private land, it was exempt from the national speed limit of 12 miles per hour.

The races helped bolster the Earl De La Warr's attempts to put Bexhill on the same level as Monte Carlo as a seaside resort for the jet set, and it was the first motor racing seen in the country. The 1902 races were won by French driver Leon Serpollet in his steam car Easter Egg, which reached a speed of 54 miles an hour (a replica can be seen at Bexhill Museum). The motoring events lasted until 1907, when the Brooklands motor racing circuit was opened in Surrey. (Source)

Today the trail-blazing motor racing drivers of 1902 seem as remote in the minds of those connected with the present day sport as the Casablanca Grand Prix.

Bexhill's motor races did not occur in isolation but were part of a campaign to promote Bexhill-on-Sea as a fashionable new resort and used the Bicycle Boulevard, which the 8th Earl had built along De La Warr Parade in 1896. 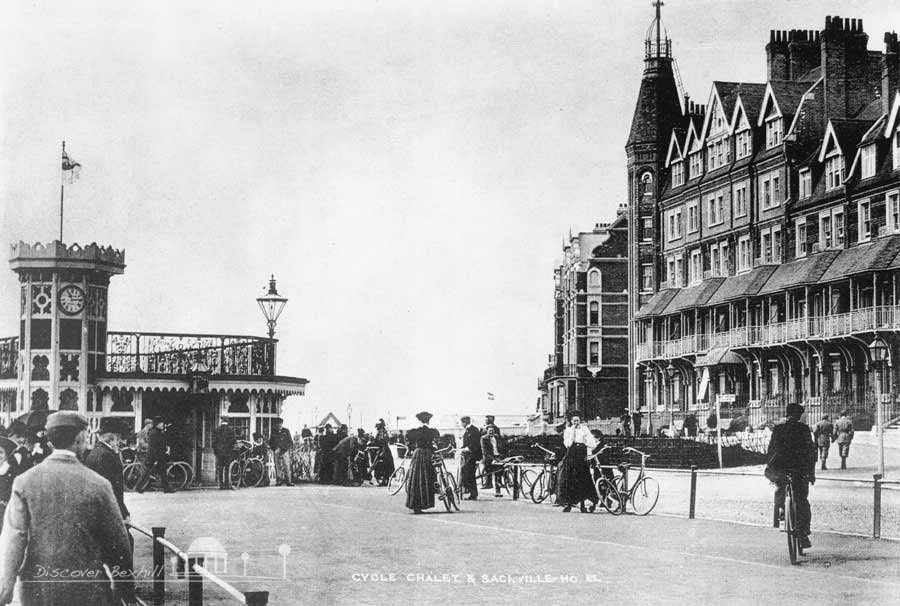 In the May of 1902, the 8th Earl De La Warr worked, in conjunction with the Automobile Club of Great Britain and Ireland, subsequently the Royal Automobile Club, to organise the very first automobile racing on British soil. Such was the occasion that thousands flocked to Bexhill to witness the unique spectacle. The very atmosphere reeked with the smell of paraffin with throbbing, puffing and snorting motors everywhere.

Away up Galley Hill at the far end of the course one could see a puff of smoke and a fair-sized speck emerge from it. A few seconds later a monster dashes past, causing the very earth to tremble.

Nothing could be seen of the drivers except a crouching figure with streaming hair, whose hands had a death-like grip of the steering wheel. Not only were straight sprint races run from east to west against the clock but cars raced side by side in the opposite direction, very much resembling the start of the Grand Prix races today.

Distinguished names appeared on the entry list. There was Lord Northcliffe, the founder of the Daily Mail Newspaper in his Mercedes. Monsieur Leon Serpollet, the Frenchman, in his steam driven "Easter Egg" with the fastest speed of 54mph and the first French victory on British soil. The indefatigable Mr S F Edge, who ran his Napier against a large entry of French owned Darracqs, and many more well known personalities of the day. 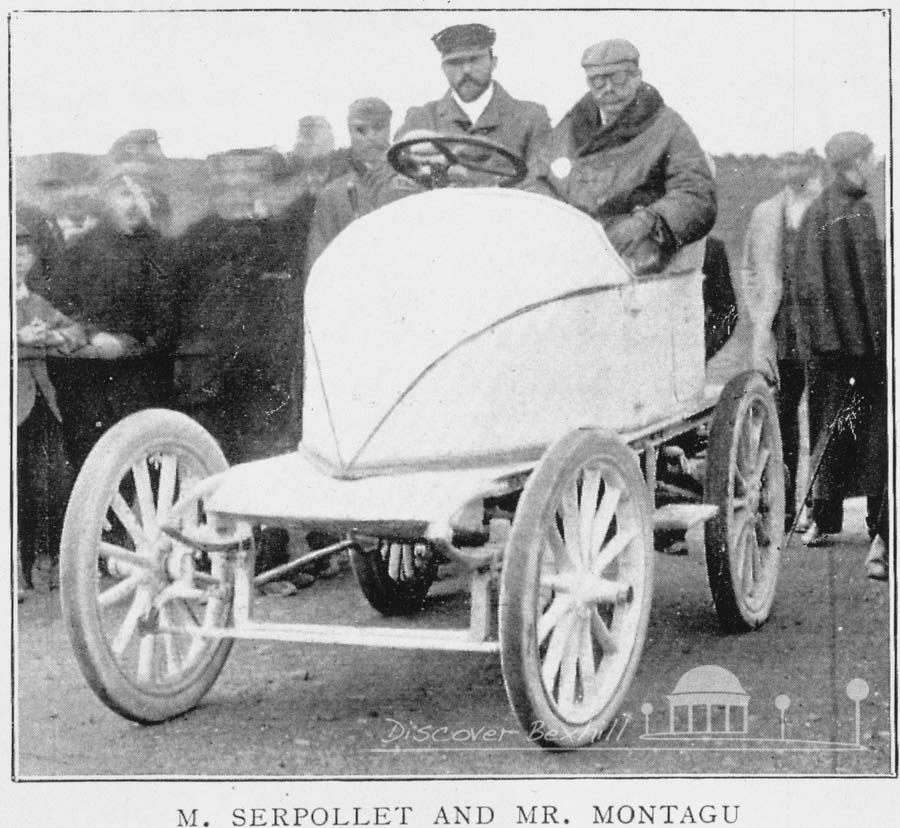 More than 200 entries competed in that inaugural meeting in 1902 and the local hotels and boarding houses were packed with the curious who had come to witness, for the first time on British soil, the spectacle of motor cars racing at speeds in excess of 50mph when the speed limit of the day was a mere 12mph. 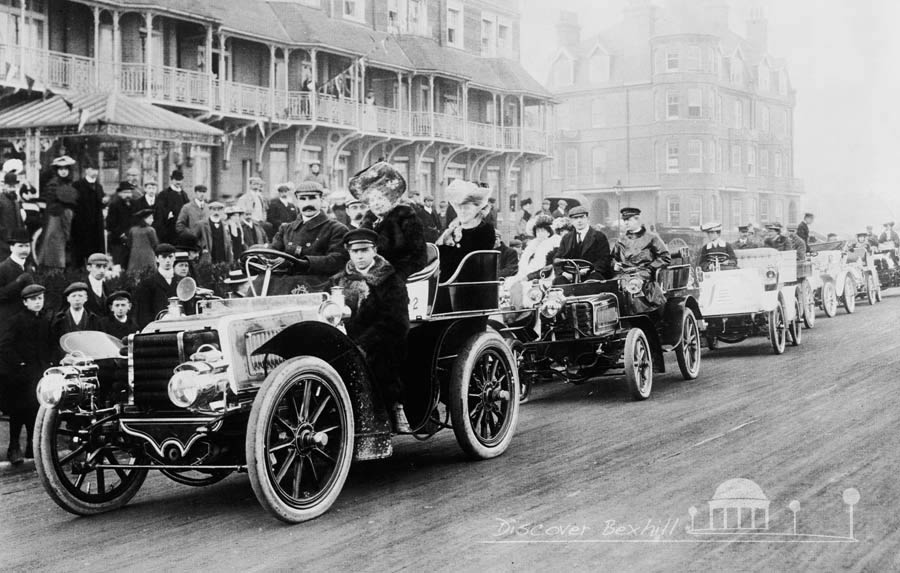 The huge success of the meeting encourages Earl De La Warr to make Bexhill the motoring centre for British racing drivers of the day. By 1906 plans were drawn up for a circuit almost reaching Beachy Head, with garages, restaurants and hotel accommodation. The course unfortunately never saw the light of day and the motoring set moved to the new Brooklands circuit in 1907. A few attempts were made to resurrect the races and the last competition was held in 1925 after which the Royal Automobile Club withdrew permits on public highways.