You are here: home » history » history of bexhill 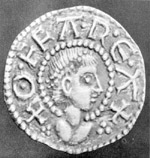 The first reference to Bexhill, or Bexelei as it was originally called, was in a charter granted by King Offa of Mercia in 772AD. It is recorded that King Offa had 'defeated the men of Hastings' in 771AD.

At this time, the term Hastings would have referred to this whole area rather than the town itself as we know it today. In the charter, King Offa established a church and religious community in Bexhill.

During the Norman Conquest of 1066 it appears that Bexhill was largely destroyed. The Domesday survey of 1086 records that the manor was worth £20 before the conquest, was 'waste' in 1066 and was worth £18 10s in 1086. King William I used the lands he had conquered to reward his knights and gave Bexhill manor to Robert, Count of Eu, with most of the Hastings area. Robert's grandson, John, Count of Eu, gave back the manor to the bishops of Chichester in 1148 and it is probable that the first manor house was built by the bishops at this time. The later manor house, the ruins of which can still be seen at the Manor Gardens in Bexhill Old Town, was built about 1250, probably on the instructions of St. Richard, Bishop of Chichester.

The Manor House was the easternmost residence owned by the bishops and would have been used as a place to stay while travelling around or through the eastern part of their diocese. There were often disputes between the Bishops of Chichester and the Abbots of Battle Abbey, usually about land ownership in this area. In 1276 a large portion of Bexhill was made into a park for hunting and in 1447 Bishop Adam de Moleyns was given permission to fortify the Manor House.

In 1561 Queen Elisabeth I took possession of Bexhill Manor and three years later she gave it to Sir Thomas Sackville, Earl of Dorset. The Earls, later Dukes, of Dorset owned Bexhill until the mid 19th century. Their main residences were Buckhurst Place in Sussex and Knole House in Kent.

In 1804 soldiers of the King's German Legion were stationed in barracks at Bexhill. These troops were Hanoverians who had escaped when their country was overrun by Napoleon's French Army.As King George III was also the Elector of Hanover, he welcomed them and they fought as part of the British Army. At about this time, defensive Martello Towers were built along the south east coast, some near Bexhill, in order to repel any French invasion. In 1814 the soldiers of the King's German Legion left Bexhill, eventually playing an important part in the Battle of Waterloo the following year. The German troops had been here to protect Bexhill from the French. However, many of the local people were actively trading with the enemy by way of smuggling. The best known of the local smugglers were in the Little Common Gang and the most famous incident was the infamous Battle of Sidley Green in 1828.

In 1813 Elizabeth Sackville had married the 5th Earl De La Warr, and when the male line of the Dukes of Dorset died out in 1865 she and her husband inherited Bexhill.

It was the 7th Earl De La Warr who decided to transform the small rural village of Bexhill into an exclusive seaside resort. He contracted the builder, John Webb, to construct the first sea wall and to lay out De La Warr Parade. Webb, in part payment for his work, was given all the land extending from Sea Road to the Polegrove, south of the railway line.

Opened in 1890, the luxurious Sackville Hotel was built for the 7th Earl De La Warr and originally included a house for the use of his family. In 1891 Viscount Cantelupe, his eldest surviving son, married Muriel Brassey, the daughter of Sir Thomas and the late Annie, Lady Brassey of Normanhurst Court near Bexhill. The Manor House was fully refurbished so that Lord and Lady Cantelupe could live in style as Lord and Lady of the Manor. Finally, the 7th Earl De La Warr transferred control of his Bexhill estate to Viscount Cantelupe.

When the 7th Earl De La Warr died in 1896 Viscount Cantelupe became the 8th Earl De La Warr. At this time he organised the building on the sea front of the Kursaal, a pavilion for refined entertainment and relaxation. He also had a bicycle track made, with a cycle chalet, at the eastern end of De La Warr Parade. These amenities were provided to promote the new resort. Meanwhile, many independent schools were being attracted to the expanding town due to its health-giving reputation. 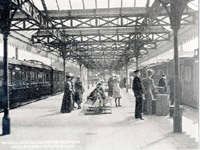 The railway came through Bexhill in 1846, the first railway station being a small country halt situated roughly were Sainsbury's car park is today. This was some distance from the village on the hill. A new station, north of Devonshire Square, was opened in 1891 to serve the growing resort.

In 1902 the current railway station was opened and a Bexhill West Station was built for the newly built Crowhurst Branch Line.

1902 was the year that Bexhill became an Incorporated Borough. This was the first Royal Charter granted by Edward VII. Bexhill was the last town in Sussex to be incorporated and it was the first time a Royal Charter was delivered by motorcar. To celebrate the town's newfound status and to promote the resort, the 8th Earl De La Warr organised the country's first ever motorcar races along De La Warr Parade in May 1902. The town was scandalised at this time by the divorce of Earl De La Warr. Muriel had brought the action on the grounds of adultery and abandonment. She was granted a divorce and given custody of their three children. Muriel, with her children, Myra, Avice and Herbrand, went back to live with Earl Brassey at Normanhurst Court. The 8th Earl De La Warr remarried but was again divorced for adultery. He also suffered recurrent and well-publicised financial difficulties.

At the start of the First World War in 1914 the Earl bought a Royal Naval commission. He died of fever at Messina in 1915.

Herbrand Edward Dundonald Brassey Sackville became the 9th Earl De La Warr. He is best known for championing the construction of the De La Warr Pavilion, which was built and opened in 1935. The 9th Earl also became Bexhill's first socialist mayor. He died in 1976.

The Second World War caused the evacuation of the schools and substantial bomb-damage to the town. Many schools returned to Bexhill after the war but there was a steady decline in the number of independent schools in the town. The break-up of the British Empire and in particular the Independence of India in 1947 hastened the process. Most of the schools were boarding and catered largely for the children of the armed forces overseas and of the colonial administration. Although the number of schools decreased, many of the parents and former pupils had fond memories of the town and later retired to Bexhill.

Schools and tourism had been the sources of the town's prosperity. From the 1960's the town began to lose its appeal as a seaside resort and became more residential in nature. This, combined with the loss of the many independent schools, severely affected the local economy.

In July 1972, Bob Marley's performed at the De La Warr Pavilion in his first ever UK gig. He appeared as support for Johnny Nash in an event organised by Bexhill Lions Club to raise money for the Glyne Gap swimming pool fund.

I was born in Bexhill, in 1945, was married there, and lived, and was a regular visitor until mine, and my wife's parents died some 10 years ago. Anyway, your info about Sidley Station is wrong. I believe that it was closed at around the same time as Bexhill West Station. I travelled on the penultimate train, on a Sunday night, from Bexhill West, and, when they had steam trains running on the line, used to train spot on Sidley Station. A bit of a waste of time, as there were only a couple of different locomotives, and an 'Austerity' goods locomotive.

Perhaps you could include the goods yard, where Beeching Way now stands. It was a large concern in it's time, but it fell into disuse before the station went. Strange that I remember this, as I am not a train buff! I went to school at the Down Junior School (now King Offa's) and learnt to swim in 'the Baths' as they were called.