You are here: home » history » smuggling in Bexhill

This project was a collaboration between the Society of Bexhill Museums, Rother District Council and the European Regional Development Fund to raise awareness of Bexhill's smuggling heritage. From 1700 to about 1850 smuggling had become a serious problem in this country. Many local families were heavily involved in this illegal trade and the area is rich with smuggling tales and folklore.

Our smuggling past was in danger of being forgotten, outside of history books there is little to show for the dramatic events that took place in Bexhill over one hundred and fifty years ago. The inspiration for the project came from the Society of Bexhill Museum's patron, actor and comedian Eddie Izzard.

This was once the site of Martello Tower number 44, built in 1808-9 and eventually destroyed through coastal erosion by about 1868. 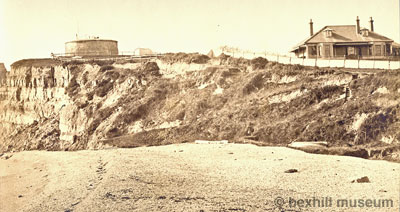 Customs and Excise officers or 'Preventivemen' tried to stop smuggling with the help of the army in the form of dragoons, who were mounted soldiers able to ride with speed to where they were needed. The situation worsened after the Battle of Waterloo due to the return of thousands of soldiers and sailors who could find no legitimate employment and so turned to smuggling. The Coast Blockade was formed in 1818 to meet the new threat and was eventually replaced by the Coastguard in 1831.

It was from this Tower that, on the moonlit night of 3rd January 1828, the men of the Coast Blockade were called to reinforce their colleagues who had spotted smugglers landing a cargo to the west. They readied themselves for action in the bloody events which became known as the infamous 'Battle of Sidley Green'.

(Location: near the bottom of Sea Road / Sailing Club)

On Friday January 3rd 1828 at about 1am, smugglers gathered near this spot to unload a cargo of contraband imported from France. 'Tubmen' were employed to carry the tubs of alcohol and packets of tobacco, and the tubmen were protected by 'batsmen', so-called because of the 'bat', a 6-foot long wooden staff wielded by each man. 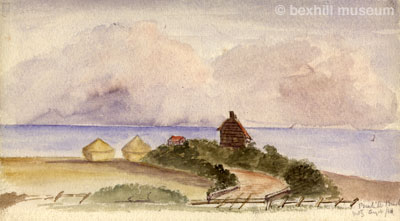 However, this was not to be an uneventful or peaceful night. The smugglers' clandestine labours were spotted by a member of the Coast Blockade on watch, who fired his pistol to alert colleagues at the nearby Martello Towers, one of which was near where the De La Warr Pavilion now stands, and another near the site of the Sackville Hotel. The batsmen formed two lines each side of the tubmen to shield them as they unloaded the cargo. A desperate race then began to get the illicit cargo inland before the Coast Blockade was able to gather sufficient reinforcements to overpower the formidable batsmen. The smugglers moved up Sea Road, then a rough track that linked the ancient village of Bexhill, our present Old Town, to the shore, completely undeveloped at that time except for the Martello Towers.

The grim and bloody encounter finally took place at Sidley near The New Inn, an event which later became known as the 'Battle of Sidley Green'.

During the late 18th and early 19th centuries, smuggling had become a serious problem and many local families were involved to a greater or lesser degree. The Pocock family, who used to run the butcher's shop at the far end of High Street, are known to have been involved in smuggling in the late 18th century. 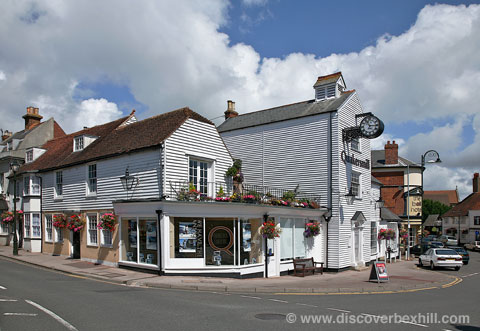 Late at night on January 3rd 1828, a running battle between smugglers and blockademen shattered the peace of this sleepy but secretive community. Smugglers from the Little Common Gang had landed an illicit cargo on the shore and were racing to bring it inland, with men of the Coast Blockade in hot pursuit. 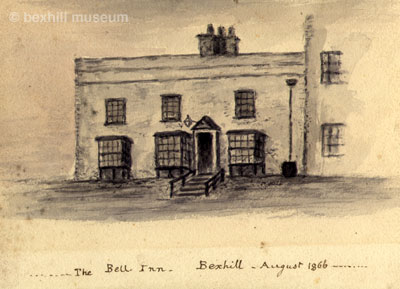 An eyewitness staying at The Bell Inn saw smugglers taking a wounded man and a cartload of goods into the yard of the Inn. He also reported villagers shouting from their windows to the smugglers below, warning them that the blockademen were close behind.

The final and fatal encounter took place further inland when the Coast Blockade's reinforcements arrived. It was the infamous 'Battle of Sidley Green'.

Late at night on Friday 3rd January 1828, with Sidley Green illuminated by the light of the moon in its last quarter, a dramatic and bloody scene unfolded. 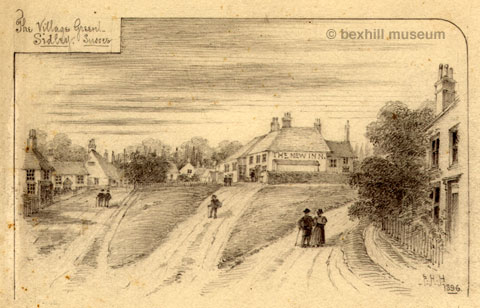 Smugglers had fought a running battle with men of the Coast Blockade all the way from the shore, and it was at Sidley Green that the fight reached its fatal climax. Reinforcements from the Galley Hill Martello Tower arrived and the smugglers' batsmen drew up into a line to hold them off, while the carts of contraband, and tubmen with barrels of alcohol and parcels of tobacco, made their escape.

The brutal fighting involved about 16 to 18 batsmen, wielding their long wooden staves, with a similar number of lightly armed smugglers in support, and about 40 blockademen armed with swords, muskets and bayonets. Many combatants were seriously wounded, two fatally. On the Coast Blockade side, Quartermaster Collins had his brains beaten out by the batsmen; on the Smugglers side old Timothy Smithurst was shot through the neck. Smithurst's body was found the next morning still grasping a wooden bat, which was almost hacked to pieces by the cutlasses of the blockademen.

The smugglers and most of the cargo escaped but ten men were later arrested. A local girl 'of loose character' gave information that led to the arrest of her lover, Charles Hills, and he became an informer in return for a reduction in his sentence. They were at first sentenced to death but this was then reduced to transportation for life, to New South Wales in Australia.

(Location: near the Star Inn)

The Star Inn is ancient, probably dating back to the 15th century. It was on the main highway between Hastings and Pevensey and was a known haunt of smugglers until the early 19th century. 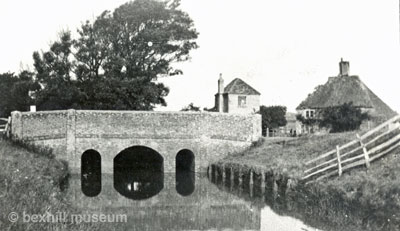 The Star Inn Bridge, where the Gillhams hid their boats

The Little Common Gang of smugglers concealed their two luggers at a secret location near here; they were The Long Boat and The Princess Charlotte. The marsh was difficult for the authorities to patrol and local knowledge was needed to cross it safely, particularly at night.

A pitched battle was fought here in February 1822 between the Little Common Gang and men of the Coast Blockade. About three hundred smugglers assembled outside The Star to await the arrival of The Princess Charlotte. Before the ship made landfall, an armed party of blockademen arrived and broke up the gathering with gunfire, shooting one of the smugglers in the process. The Princess Charlotte then put back to sea, and one account of the incident tells of a mysterious lady who had been waiting for the ship, in a coach pulled by six horses. On the arrival of the blockademen she drove off at speed. Perhaps she was a spy or secret agent, as the smugglers provided a useful way of crossing the Channel and sending messages without detection.

Little Common developed around the crossroads on the main road from Hastings to Pevensey. 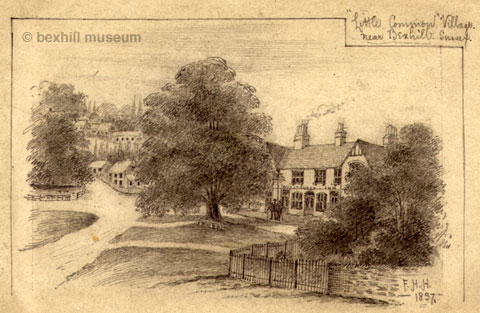 The Gillham family were carpenters in Little Common from about 1803 until 1860 and played an important part in the development of the village. They were also, until the 1830s, notorious smugglers. George Gillham (1773-1831) was the leader of the ruthless Little Common Gang, which operated two smuggling vessels, The Long Boat and The Princess Charlotte. When not in use these were concealed at a secret location near The Star at Normans Bay.

Smugglers used nicknames to conceal their identities when plying their illegal trade and some of them are known for the Little Common Gang. George Gillham was known as "Smack", Thomas Gillham was "Peckham" and Thomas Shoesmith was "Boathook". It is said that they had a hideout in Gillham Wood, which they used when it was unsafe to return home.

It is probable that the Little Common Gang was responsible for the murder of blockademan William Welch, whose body was washed up on Bexhill beach in 1824. It was rumoured that he had accepted a bribe from the gang to turn a blind eye to a smuggling run, but, when it landed, he was waiting with a group to seize the vessel. It put back out to sea but not before the crew had grabbed Welch, beaten and then drowned him.